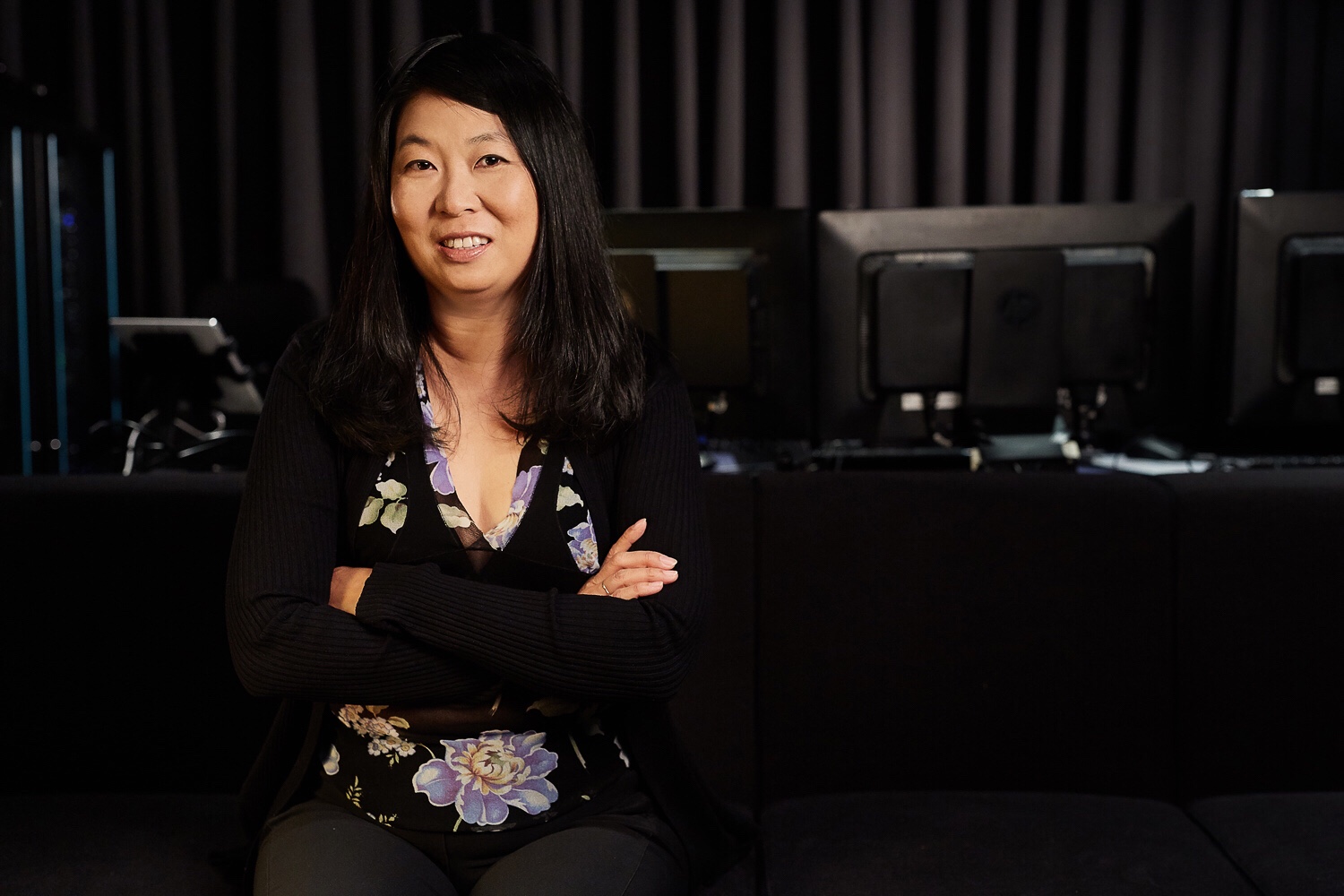 We take a peek behind the curtain and chat with Peilin Chou, the Chief Creative Officer of Pearl Studio (formerly Oriental DreamWorks), an accomplished producer who has worn many hats through her diverse and fascinating career in show business.

This accomplished CTI alumna began her career with Walt Disney Studios,went on to work at Nickelodeon, MTV Networks, AZN Television, and even helped to launch Spike TV. Peilin has also kept her foot in the stage door of Broadway, where she was a Company Manager & Artistic Associate at the Roundabout Theatre whose projects included Cabaret and Sideman, andhelped to launch the Tony Award-winning musical Fosse.

As Chief Creative Officer of Pearl Studio, I oversee all the content created by Pearl Studio. A CCO is a bit like a CEO, but for all things creative. My job includes overseeing everything from buying and developing ideas and scripts, to overseeing films in production, to working with writers, producers, songwriters, and visual artists on all facets of the development and production process. I am also responsible for the overall creative direction and goals of the studio. The mission of Pearl Studio is to be a premier family entertainment brand, creating original world class films that enchant, inspire, and awaken audiences around the globe. My goals are every day to actively do something towards that mission.

What led you to this career path? How has CTI affected you?

Growing up, I never thought working in film, TV, or theater was something you could do for a career. I never knew anyone who worked in the field. I went to college at UCLA, and ended up doing a bunch of internships, including one on a scripted drama television show where I really got to see (through fan mail) the strong impact that what we were creating had on viewers there. From that moment, I was hooked! I was lucky that my first job out of college was at the Walt Disney Studios in Creative Development. Since that time, I have pretty much worked in creative development for my entire career. It has spanned a number of mediums and genres — film, television, animation, digital, and of course, theater, but always in creative development. CTI has been a great inspiration to me, as well as a great resource for networking, finding talent, and learning about new projects. I did what I like to call the CTI “trifecta” of programs — the NYC 3 Day, the O’Neill 3 Day, as well as the NYC 14-week. Each of them was a different experience, but I got a lot out of each of those programs.

First, being in the CTI community is always inspiring — being in the company of others striving to achieve similar goals, as well as hearing the stories and experiences of speakers that have achieved certain goals, was always energizing and exciting. Second, I have met so many people through CTI that have directly led me to very fruitful creative endeavors. It’s been so fruitful, I’ve actually kind of lost count. One example is I met an actress at a networking event during the NYC 3-day, which directly led me to producing a musical. And that experience led me to meeting songwriters who I actually ended up hiring on a film project right here at Pearl Studio! You never know where one thing will lead to. The other great thing I love about CTI is the camaraderie amongst those in your classes. These people are your peers and potentially your greatest supporters — you kind of end up growing up in the industry together in a way. The relationships I made in the programs I participated in definitely extended far beyond the duration of the class.

What do you think makes content global? What are steps that producers can take to make a production appealing to a wide audience?

I think one of the key things that makes content global is having universal themes that everyone can relate to. The idea of home, and finding home, for example, or the concept of family or belonging, are meaningful whether you’re a child in Brazil or a grandmother in China. There are certain things that can resonate worldwide. When you’re looking at global content, I think it’s important to make sure the broader scope of what you’re saying or talking about is wide enough to be universally relatable. The particulars and details of course can (and should) be specific to a character or a culture, but the larger themes can be relatable to any culture.

What makes a project exciting to you? Are you working on anything now that you are particularly enthusiastic about?

What makes a project exciting for me is working on something that I feel people are going to be moved by, and that has the potential to perhaps expand the way that people see the world. We talk about “awakening the audience” in our mission statement — and that’s really at the heart of what we mean by awakening. We currently have two projects in production at Pearl that I’m really excited about. ‘Abominable’ is the story of a Yeti trying to get home to Mount Everest with the help of three Chinese teenagers. This is being produced in collaboration with DreamWorks Animation and will be released worldwide by Universal Pictures in the Fall of 2019. Our second project is called ‘Over the Moon.’ It is being produced in collaboration with Netflix and is the story of a little girl who decides to build a rocket to go to the moon, in hopes of meeting a legendary moon goddess. What I’m most excited about on ‘Over the Moon’ is the opportunity to work with animation legend Glen Keane, who is directing the film. Glen was at Disney for almost 40 years and is the animator who created so many beloved Disney characters, including Ariel from ‘The Little Mermaid,’ The Beast from ‘Beauty and the Beast,’ Aladdin, Pocahontas, Tarzan, and Rapunzel from ‘Tangled.’ Watching Ariel and ‘The Little Mermaid’ was one of the things that made me want to work in animation to begin with, so it’s kind of a lifelong dream to be able to collaborate with him on this film. I know he will make ‘Over the Moon’ an unforgettable and deeply moving film.

Can you discuss the major differences and similarities between producing in the film industry versus the theater industry?

There are many practical differences in terms of budget, players, approach, or scope, but actually there is also a lot of overlap as well. Probably more than you think. First, at Pearl we hire talent from the theater world all the time. Playwrights as well as songwriters are most common, but sometimes set designers or choreographers as well. And of all the film genres, the process of animation development and production is probably the closest to theater, because of the storyboarding process. All films are storyboarded first before they are animated, so you get to see the whole film up on reels (storyboards) before any sequences ever go into animation — which is quite similar actually to the workshopping process of theater. You get the opportunity to see something up on its feet, and then re-write or reconceive based on that experience, and then go at it again. Unlike live-action where footage has been shot, storyboards can be quickly re-drawn and changed to be something completely different. It’s one of the parts of the process that I really enjoy the most, because getting at the heart of characters or story and being able to see what’s working and what’s not working — that’s to me the purest and most meaningful part of the development process. And that’s true regardless of the genre or medium you’re working in.

Do you have any advice for our readers?

My advice would be to always follow your passion and listen to your heart when it comes to picking your projects. No one can tell you that your taste or what you love is wrong — it’s your taste! When I started out in the industry, I was playing a lot of catch-up, and I often found myself questioning whether the things I loved were worthy or worthwhile or “right,” but what you learn over time is that no one really knows or has all the answers. And so much of it is also about climate, and timing and medium and purpose.

I remember early on in my career I came upon an obscure student film that I thought was really hilarious, and I took the initiative to try to share that film with other executives at my company in hopes of being given the opportunity to pursue other projects or ideas with the directors of the film. At the screening, people were bored and restless, and all of these seasoned and well-respected executives left the screening room before the film had even ended. I was mortified and thought certainly they would never value my opinion again. A short one year later, the directors of that film, launched a then unknown television show called…’South Park!’ And Trey Parker and Matt Stone, the directors I had been trying to “champion”, became household names forever. So, as you can see — you never know!